Posted via LiveJournal app for Android.

Tonight I changed the oil and started in on replacing the seat bushing.  looks pretty odd without a tank. Posted via LiveJournal app for Android.

I finally took some time to poke at my makerbot again.

gordonmessmer and I tried to get it working again in a fairly standard config only to be reminded of how much the mk4 extruder sucks. Many moons ago when I was spending more time with this machine I had printed and intended to make a Wade's Extruder work on my makerbot but ran into some unspecified issue with the extruder firmware or hardware. Folks in #reprap pointed me to this article on how to get a makerbot to use a stepper driven extruder. Since I happen to have an extra stepper board I set about combining all these things. Lo and behold, it actually worked... mostly. So, if you have a makerbot and want better extrusion without spending the cash on a Mk5 extruder (which I still have my doubts about) follow these exciting instructions:

Build your own Wade's extruder and assemble it. I used this tool to make hobbing the easier. After breaking my one good M3 tap I picked up a 6-32 tap and used that to hob the bolt. This works better as a #6 calls for a clearance hole of about 3.5mm which should provide better grip on the 3mm filament.

Cut one of these out of 6mm plywood or similar. I also highly recommend the use of adjustable endstops. I even went so far as to design some adjustable endstop flag mounts for my Makerbot. They work ok, but are probably due a redesign. Assemble everything and mount it all up in your makerbot.

Follow these directions to hook up your stepper controller. I used an external stepper driver rather than using the extruder's H-Bridges as I had an extra gen3 stepper driver and I have some doubts as to how well my H-bridges are working right now. I followed the directions to grab the source code and reflashed my extruder to use an external stepper. I mounted my extruder and extra stepper controller above the mainboard on the side of my makerbot. Very tidy!

Download the latest ReplicatorG (0023 as of this writing.) I've been manually modifying the generated gcode by doing a global search and replace of "M108 S255" with "M108 R6". 6 RPM seems to work well. I tried a decimal number but that caused a java exception while estimating build time. 8 RPM was too fast, and 5 too slow. 6 appears to work well as all of the objects I have printed since come out quite strong.

The only change that I have so far made to skeinforge is in Multiple. The default is set to 'on' with the center at 0,0 which puts the printed object in the lower left of the build platform. The problem is that any overhangs into the -X and -Y direction cause the bot to trigger the endstops, which makes the prints all wonky. Instead, set the center in Multiple to 50,50 and the bot will move there when it starts to print and avoid all that.

Do all of the above and printing is as simple as:


The Makerbot will do it's little startup ritual. Once you clear the test extrusion and hit Yes it will move to somewhere in the middle of the build platform and start a raft. After that it's just a matter of waiting for the print to finish.

Just before we bought the house I'd noticed that the Rockster was making a lot more noise on the right side than it should.

gordonmessmer and I popped the right valve cover to do a quick adjustment and found that the right intake valve was out of spec. Way out of spec. In the 2000 miles since the last service the valve gap had widened by something like 0.5mm. I tightened it up for the time being and only rode it once more to get it to the new house.

Last weekend I finally got the time to open up the engine and take a look. After two trips to Sears for more tools as well as a good deal of swearing I finally got my answer. The intake pushrod was short, by 0.57mm compared to the exhaust. Now you'd think that this would have been the result of a deteriorating pushrod end, or some other calamity. No actually. All I need to do is replace the pushrod. But "How" I hear you saying "does a pushrod get shorter without the ends wearing?" Here's how: 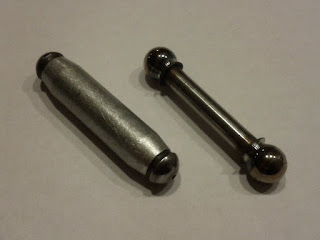 The one on the left is the original exhaust pushrod. The one on the right is the replacement I bought. They are both the same part number. Do you think that perhaps BMW figured out that the old one wasn't cutting it? Anyway, they are damn near the same weight. The old one weighs in at 11.18g while the new one is 11.90g. Seems worth the extra .72g to not dissolve into the engine oil. Anyway, I've ordered 3 more as I might as well do all 4 at once and save myself the trouble in the future. Not worth opening it all up again.

Still unpacking and setting up the new house. The dining room table showed up on Thursday but there was a complete comedy of errors including the taller legs not fitting, a leaf getting dropped and splitting and one of the accessories being wrong. It's all getting sorted out, but for the moment we only kind of have a table.

Friday was the company holiday party,

gordonmessmer graciously accompanied me and we had a pretty good time. I was only mildly hung over on Saturday so Gordon and I went to the International Motorcycle Show and wandered around. There was a totally sweet sidecar rig owned by Rich of Rich's custom upholstery:

I picked up a kind of dolly that you can park your bike on the center stand and move it around more easily. Gordon broke down and signed up for the sidecar class, and I put my name down too. I'll need the refresher because Sunday I scored this lovely little accessory for my bike:

It's in amazingly good shape for it's age. It's missing the seat lock (I have one) and a reflector. Everything else appears to be there and in good shape. I just need to pick up the attachment bits to bolt it up to the R50.

We moved. I'm dead tired. I'm reclining on the awesome couch drinking fortified cider. I will sleep soon and I get to do more tomorrow.

Thanks to all the wonderful people who came out to help. Gordon, Ian, Brandon, Matt, Kent, Pat, Andrew, Erin (Jack Henry helped too!) and my mom and dad. We could not have done it without you.

The Rockster is officially mine now. This is the first large (i.e. titled, licensed) piece of real property that I think I've ever fully owned. Does this make me a grown up now?

Time from perceived need to assembled object: less than 24 hours.

For a while now I've been wanting a small metal-working lathe for doing some work associated with the MakerBot and RepRap. There are a few parts on those machines that you need a lathe to make. A new-found friend I met through a few connections has a really nice old lathe and was generous enough to turn the parts we needed so I'm no longer in need.

That didn't stop me from keeping an eye on craigslist though. I managed to score a gently used rebranded Sieg 7 x 12 with a bit of tooling. I have since learned that this is the same lathe sold by harbor freight and grizzly as well as a few other companies. They're all made in the same factory and are of surprisingly good quality for the price. One definite upside to all of this is that both replacement parts and upgrades are readily available. Of course this means that I had to go and buy some of them. :)

Here it is in the back of the car: